see During the 2013 / 2014 school year, it was announced that FWAFA’s orchestra program would end at the end of the school year.

Below is the email parents and students were sent along with the attached PDF documents explaining the reason. 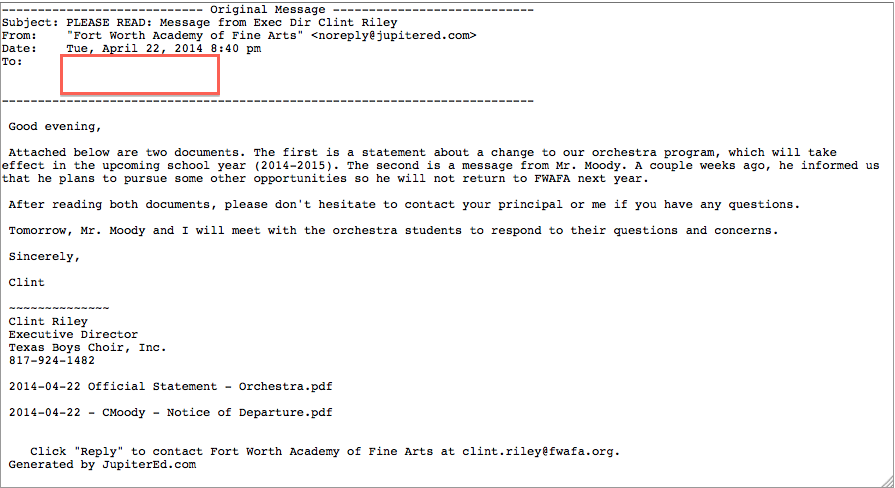 Here is the official explanation for dissolving the program.

The suggestion that the orchestra is just too small with 27 members is ridiculous. Too small to do what? Play music? Grow over time? Have you ever been to a FWAFA high school musical? How many musicians are involved? Ever looked down in the pit of a touring Broadway musical? How many of each instrument did you see? 27 musicians would be a lot of musicians in a Broadway pit and a whole lot for a FWAFA musical. Who thinks that in order to have an orchestra you need 60 or more musicians?

How many musicians does it take to call the group an “orchestra”?

If you don’t have multiple stringed instruments playing the same notes, wiki would suggest that 27 or less could be considered a “classical orchestra”.

What about a FWAFA Chamber Orchestra?

“Chamber music is a form of classical music that is composed for a small group of instruments, traditionally a group that could fit in a palace chamber. Most broadly, it includes any art music that is performed by a small number of performers, with one performer to a part. However, by definition it usually does not include solo instrument performances. Because of its intimate nature, chamber music has been described as “the music of friends.”For more than 200 years, chamber music was played primarily by amateur musicians in their homes, and even today, when most chamber music performance has migrated from the home to the concert hall, many musicians, amateur and professional, still play chamber music for their own pleasure. Playing chamber music requires special skills, both musical and social, that differ from the skills required for playing solo or symphonic works.”

Sounds like a chamber orchestra is exactly what FWAFA needs.

Interestingly, TBC Inc just spent who knows how much money hiring an outside firm to help them formulate a new strategic plan that takes the organization up to 2019. A 5 year plan.

Here is a screen shot of the page related to the ARTISTIC STATEMENT regarding the orchestra (as of August 30, 2014). 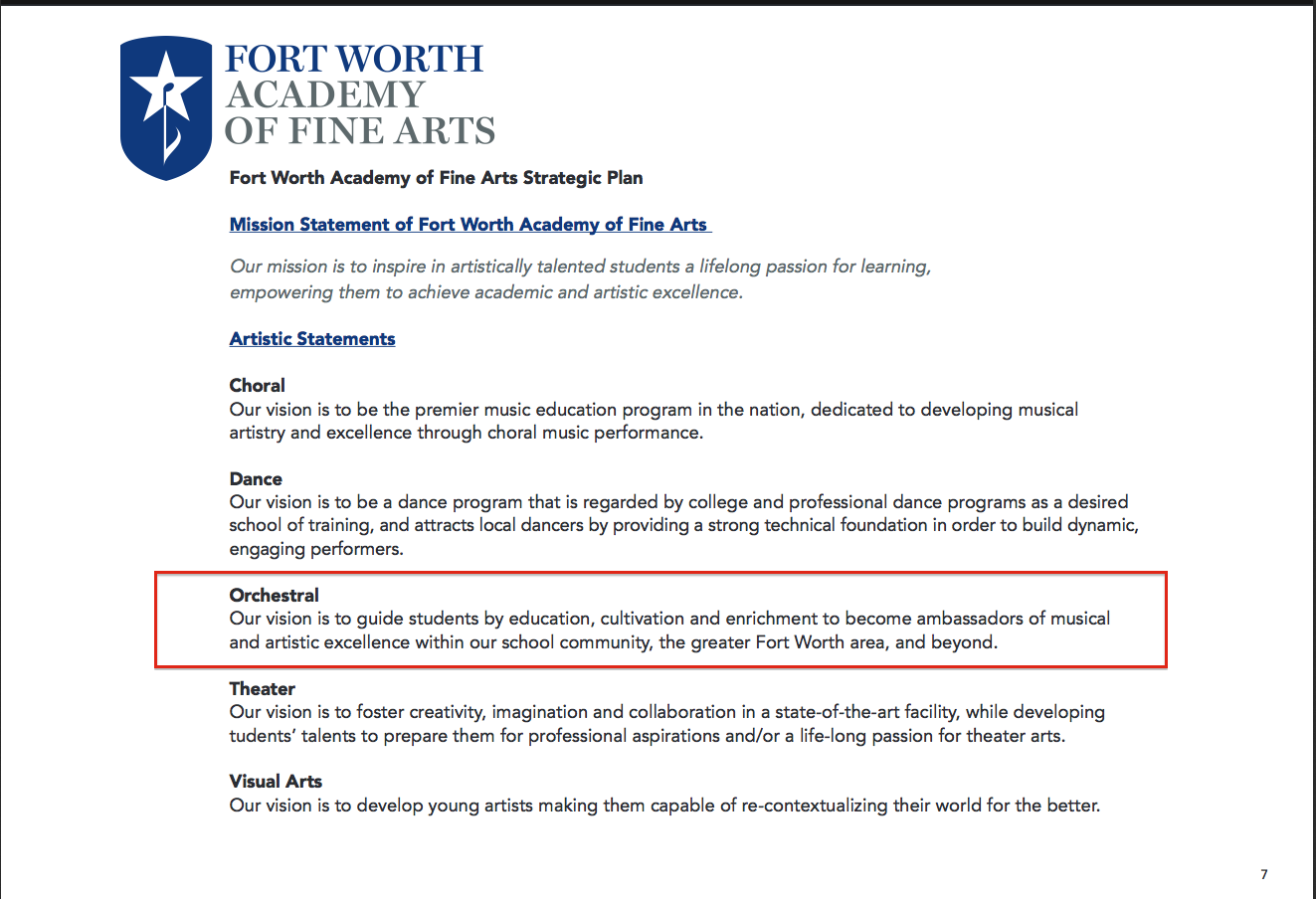 If you’re going to make your orchestral program part of your strategic plan for the next 5 years but then dissolve it in the same breath, what does this suggest about the accuracy of the strategic planning document as a whole?

Maybe the strategic plan should be updated so perspective parents and students aren’t getting mixed signals. Something like this… 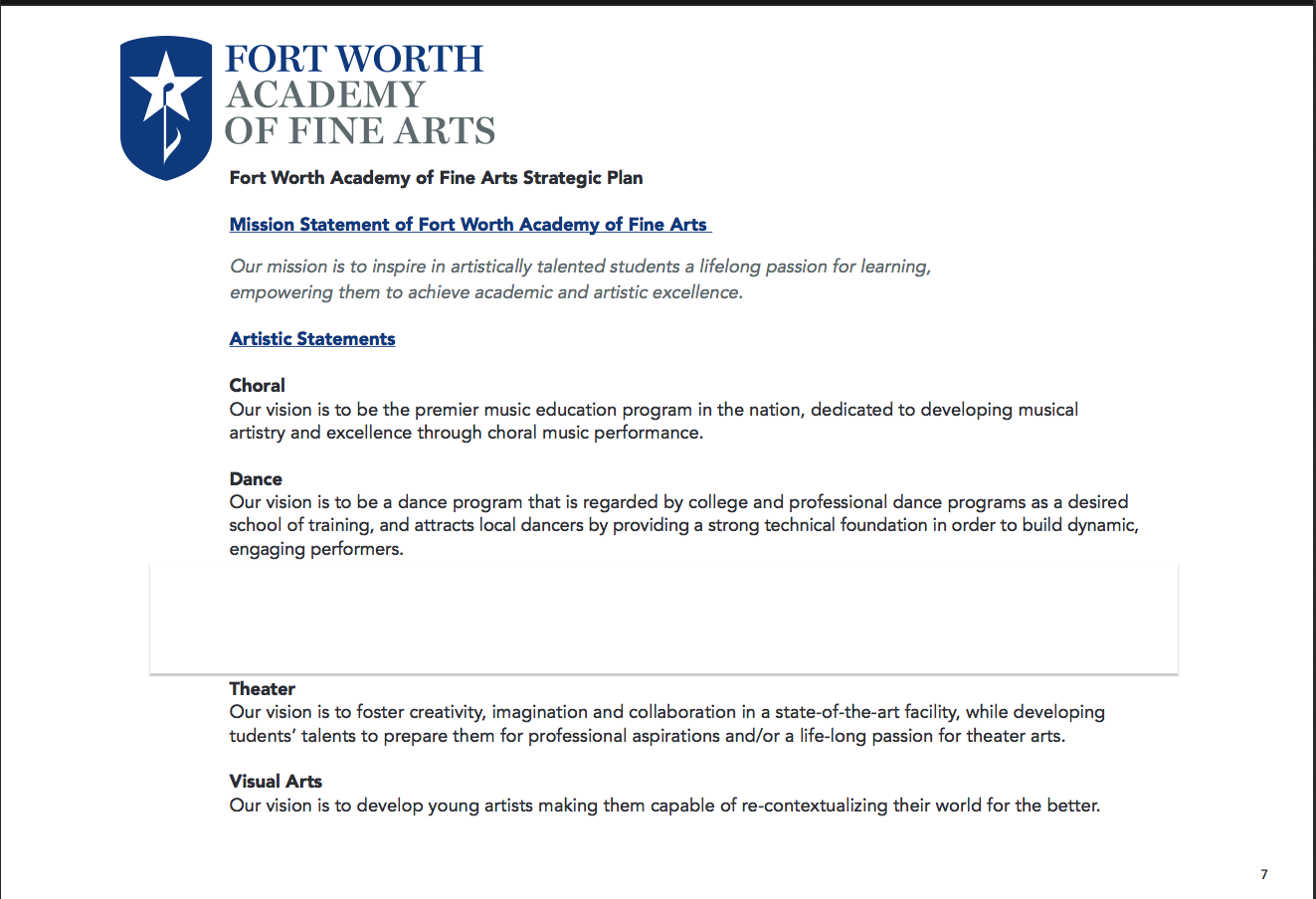 This part of the strategic plan clarifies things a bit.

TBC Inc appears to have an identity crisis. Is TBC Inc a publicly funded educational institution with two small campuses (FWAFA and TESA) or is it a brand name that must be expanded? Are FWAFA and TESA brand names themselves or simply vehicles for helping TBC recruit more boys for the TBC choir?

What would it take?